Immediately after the end of the Civil War, Congress and the states ratified the 13th Amendment, which abolished slavery. Sadly, the 13th Amendment also included an exception to abolition, “except as a punishment for crime whereof the party shall have been duly convicted.” Very quickly, black citizens who had recently been freed found themselves arrested for trivial reasons and re-enslaved. Not only does that practice of forced labor for incarcerated individuals continue even now, the growth of mass incarceration over the past century has led to even more forced and unpaid labor by inmates than ever before (for example, inmates are paid $3-$5 a DAY to fight fires in California).

Over the MLK weekend, five members of the SMV Youth Group and I joined youth from across the diocese at Grace Cathedral to meet and work with Akeil Robertson-Jowers and Phoebe Bachman from Mural Arts Philadelphia, a social justice organization that seeks to inform and engage communities about injustice through mural projects. After some lunch and introductions, Akeil and Phoebe led the youth through the history of slavery in the US, followed by the passage of the 13th Amendment, and how since 1865, prisons, governments, and individuals have used the exception in the 13th Amendment to exploit prisoners for cheap or free labor. After some good discussion, the art began: the youth worked on two banners, using a template pre-designed by Akeil and Phoebe. There was also a t-shirt making station, led by a graphic artist from Los Angeles. The youth collaborated on the art and got to know each other. Pizza arrived, and the afternoon ended with the 6pm Evening Eucharist in the Cathedral, where the banner was displayed in front of the altar. 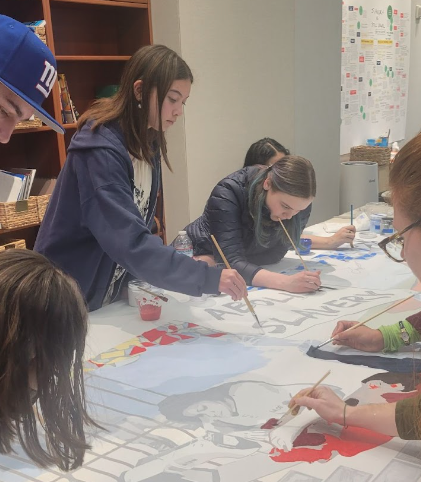 It was an incredible experience for so many reasons. We learned so much about the history of racism and exploitation in our country, and we learned what we can do about it. We worked side by side with other youth from the diocese, bonding over our shared goals. We were inspired by the artists who led us and the art that we created, knowing that art can be a powerful and meaningful step towards addressing injustice. We broke bread together numerous times, culminating in the Eucharist, reminding us of our oneness as the Body of Christ, and the work we have yet to accomplish as such. It was a moving and joyful experience.

The banner will live at Grace Cathedral; I hope that we can borrow it sometime soon to share with St. Mary’s. In the meantime, there is still work to be done to End the Exception. Please go to https://endtheexception.com/ to learn how you can take action!