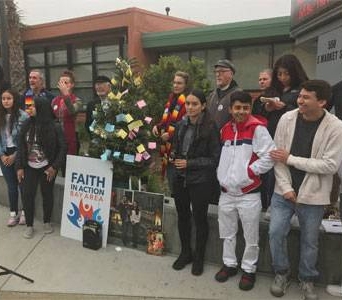 “Justice is what love looks like in public.” …Cornell West

A committed group of St. Mary’s parishioners has come together to live our Christian call to justice. As the Rev. David Erickson phrases it, the goal of justice ministry is “to address systemic evil with systemic good.” Justice goes beyond charity to address the systems that cause and support injustice. In addition to feeding the hungry, for instance, justice asks that we identify and address the sources of hunger. Justice invites us to recognize the incarnate Christ in everyone and actively live our Baptismal covenant to “strive for justice and peace among all people and respect the dignity of every human being.” If you wish more information or to be included on the Justice Ministry e-mail list, please contact David Crosson.

Could you Host an Afghan Refugee

We are receiving reports of a surge of Afghan individuals and families arriving in the Bay Area. This is in addition to the increase in asylum-seekers and refugees from other countries. Whether they arrive as individuals and as families, housing is their most immediate need.

Do you have an open guest room, in-law apartment, or rental unit where you could host one or more of these new arrivals from Afghanistan or elsewhere for a period of at least three months? You will not do it without support. A new nonprofit organization, New Anchor, will answer your questions and train you before you make a commitment. (https://newanchor.org) You are not expected to provide quarters free, and you have the right to establish conditions and boundaries upon the rental. In addition to New Anchor, St. Mary’s accompaniment team is here to support you and the individual/family in every way. For more information contact New Anchor, [email protected] or David Crosson, [email protected].

God has blessed us at St. Mary’s in so many ways. How better to serve Christ than to share God’s abundance with those fleeing persecution elsewhere? Please consider this call.

In case you missed the discussion with Almudena and David Crosson, please CLICK HERE

St. Mary’s parishioner Almudena Bernabeu is an honored international civil rights attorney and founder of the Guernica Group, which prosecutes international crimes and civil rights abuses around the world. This past September, Almudena and her team secured a landmark conviction in a Spanish court related to an infamous execution that occurred in El Salvador 31 years ago.

Asserting the authority of “universal jurisdiction,” on September 4, 2020, judges in Spain’s highest criminal court, the Audiencia Nacional, convicted Inocente Orlando Montano, 77, of the 1989 “terrorist murders” of five Spanish Jesuits, along with a Salvadoran priest and two women housekeepers. After being found guilty of one of the most infamous atrocities in El Salvador’s 12-year civil war, Col. Montano, who served as Salvadoran vice-security minister, was sentenced to 133 years in prison.

Who is Almudena Bernabeu? What was her role in bringing justice to this criminal three decades after the crime? Why was this case of murder in El Salvador tried in a court in Spain? What is “universal jurisdiction?” How did she find her way to St. Mary’s?

Almudena’s work continues around the world. She engaged in the peace and reconciliation processes created by Colombia’s 2015 Peace accord. She investigated and provided essential evidence to secure a civil judgement against a former lieutenant in the Chilean military responsible for the torture and murder of popular singer Victor Jara. She has led investigation and prosecution (again in a Spanish court) of those responsible for the genocide committed against the Mayan people in Guatemala. Almudena currently is working in projects in Venezuela, Nicaragua, Gambia, the Middle East.

Almudena holds an LLM degree in International Law from the University of Valencia. She is a member of the Valencia and Madrid Bar Associations and of the American Bar Association.

Read the full story on the Montano case in The Guardian:


For more information on the Guernica Group, read here: https://www.guernicagroup.org/guernica37

St. Mary’s Justice Ministries have joined with members of Congregation Sherith Israel in support of a young Honduran family seeking asylum in the United States. The new partnership is known as NEAT, for Nueva Esperanza Accompaniment Team, which is a program of Interfaith Movement for Human Integrity (IM4HI). …